The kiln is out and waiting for us to sand off the bottoms of the pots, check for seconds, compare the clay bodies to figure out if we are going to switch to the new one, price and then carry them over to the store.

There are people that think we don't work. This part is the work part of what we do. Tossing some clay on the wheel head is fun. But, there is work that comes after you have had the fun.

Overall we like the new clay body and think that it works well with our glazes.
We had some odd things here or there but we believe that was more about the firing and possibly reduction than the clay body.

Last year we noticed a change in the color of the iron black and the way it acted when it was applied to the bisque ware. It was just not quite the same and we could not put our finger on why.
We tried tweaking it in several different directions with no changes to how it behaved.

Then Mark remembered that when we first started the business we mixed the iron black with 200 mesh flint. Then somewhere along the line we switched over to 325 mesh flint.
Last week Mark picked up a bag of 200 mesh flint that he had ordered and mixed a batch of the iron black. At the time we were half way through glazing and you know that saying, in for a penny, in for a pound, we just went for it.

Then Mark had doubts about the glaze since it was different in color and possibly melt. We tossed two test in our electric kiln to see how it would melt.
It was fine.
In fact it turned out better than we thought it would be and reminds us of how the black use to come out.
Success!

The other thing that we noticed in this firing was the older batch of iron black and the top glaze we use seem to have had a disagreement of sorts and it looks as if the top glaze crawled on top of the black.
But, instead of the black glaze going along for the ride it stay put and the top glazed pooled thicker in places. ( I know does that make sense?)
Just take a look at the lamp base on the bottom of the back stack.
And, you should see its twin brother!
Very interesting but not something we want to repeat on purpose.

There was some great iron red in this kiln load.
There it is looking all tasty and yummy with the wood ash glaze. 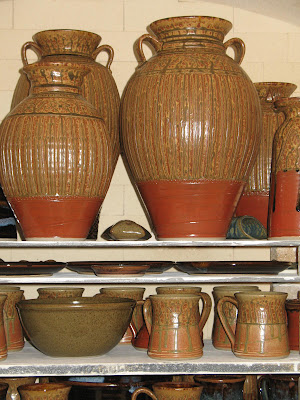 And, mugs.
Mugs,mugs,mugs.
We really needed mugs for the store.


I was fond of these jars.
Yes!

Any questions?
Or just come on out and we will show them all to you.
Bring coffee we will be out as of tomorrow and things could get ugly if we have to fight over the last cup.

Posted by cookingwithgas at 5:06 PM

I love those jars too! I'm love pouring over the before and after kiln shots. I'm amazed that people wouldn't think you work hard. All these pots look like a ton of work to me! Good stuff in this load. I see several pieces that I'd love to have.

Love those jars! You are getting some beautiful results. Yes, silica size can make a difference. Lovely pots, thanks!

Saw the two pots on the front left bottom of middle stack yesterday, said to myself 'hmm looks like some kind of test' .. Fascinating.

It seems their is never a lack of things that make you wonder. I'm glad the clay body is working for you. It does look like a very nice kiln load. 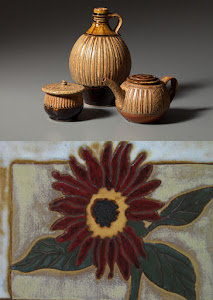 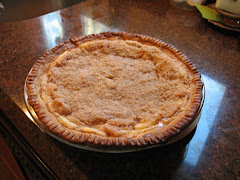